Remove any doubt about fouling issues found in trayed and packed towers.

In some processes a common problem that towers experience over a period of time is fouling of trays and packing with solid deposits. Fouling can cause conditions such as liquid maldistribution in packed columns or premature entrainment/flooding in trayed columns resulting in a loss of efficiency and an increase in operating pressure drop. Fouling may result from foreign material entering a column or from polymerization or decomposition occurring inside the column. The fouling may start under normal conditions or begin to build due to abnormal operating conditions.

Read more on how Tracerco scanning technologies can help to develop a plan to implement a routine maintenance programme for assets with fouling issues.

Many operators implement a routine maintenance programme where the column is periodically scanned to monitor the progress of the worsening condition over time. This type of programme typically begins with a baseline scan of the column. This is especially important with a condition like fouling since the scan results usually show the problems being caused as a result of the fouling rather than detecting the fouling directly.

Baseline scans provide a valuable reference that can be used to identify and monitor patterns in column performance. A baseline scan establishes a reference point, a historical standard of column performance. The scan should be performed when the column is clean, known to be in good mechanical shape, and operating with no known problems. A baseline scan of a distillation column eliminates uncertainty on future column scans, and enhances the accuracy and sensitivity of all future scans. Subsequent scans will reveal areas that are fouled or plugged in the early stages of formation and may allow operational changes to slow or halt the fouling process; allow correlations to be drawn between operating conditions and the rate of fouling; or measure the rate of deterioration caused by the fouling to better prepare needed corrective action.

For situations where you have a fouling process, or other type of deteriorating condition, a monitoring programme could save you from a process upset and a lot of misery. By monitoring the progress of the deterioration you can plan for remedial action before the condition gets “out-of-hand”.

1. Trayed Columns – Tru-Scan™: Fouling inside a trayed column can result in plugging of tray deck perforations or downcomers, which will ultimately cause severe entrainment or flooding of the trays. A Tru-Scan™ will not be able to “see” the fouling or plugging materials inside columns, but will show the hydraulic abnormalities of the trays resulting from the fouling. Baseline scans while the trays are clean provides a benchmark that serves as a reference for comparing with future fouling conditions. Subsequent scans become much more meaningful for diagnosing or monitoring the fouling accumulations. 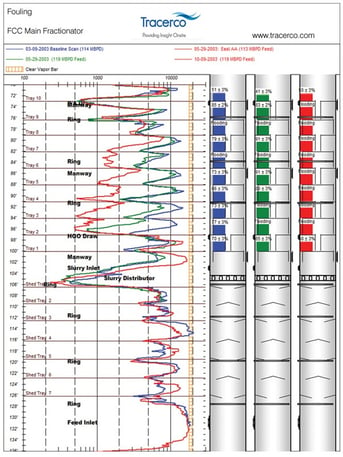 
2. Packed Columns – Tru-Grid™ Scan:. Fouling materials can accumulate inside a packed bed or on liquid distributors and collectors, if certain fouling conditions are favorable. Tru-Grid™ Scans will identify the presence of fouling in packing. The fouling typically reveals itself as a section of the packed bed with very high process density from excessive liquid retention. 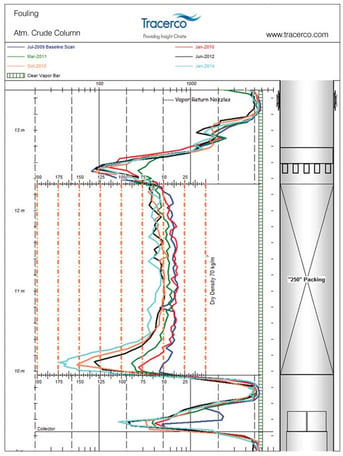 Dark blue data curve illustrates the baseline scan results; subsequent scans show flooding in the
lower section of a packed bed due to fouled packing.  For clarity purposes only one
scanline from the Tru-Grid™ Scan is shown.

Tracerco™ ThruVision scans can be used to monitor the density increase of a packed bed due to fouling or the resultant excess liquid retention and to identify the fouling distribution across the bed.  Similarly, a baseline scan and subsequent periodical scans can reveal the fouling tendency or accumulation rate over the run length between column turnarounds.

ThruVision™ scans are also a good tool to use to detect coking in FCC risers at an early stage and to start actions to prevent the build-up.  Performing regular ThruVision™ scans to monitor the riser will help develop the best plan for it’s performance and schedule shutdowns for cleaning. 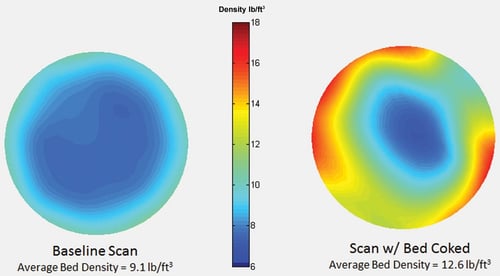 If your process is experiencing fouling issues and you have a question to ask a Tracerco technical advisor please complete the form on our contact us page at http://www.tracerco.com/contact-us.  For questions concerning this article please completed the form shown below this blog.