How to ensure accurate and reliable pipeline pig tracking

The ultimate objective of every pig run is to complete the required task, and return the pipeline to its original operating condition in the shortest time possible. A stuck pig causes delays, resulting in higher project costs, so it is important to have a contingency plan should the pig become stuck.

In this blog, we will discuss using a case study example how the implementation of our pig tracking technology allowed a customer to effectively and accurately track/time the pig trains progression down the length of the pipeline, thus resulting in huge savings on vessel and equipment costs.

Tracerco has completed many searches for missing pigs, including monitoring their locations in challenging environments, such as the Arctic Circle and in the deep waters of the Gulf of Mexico.

Tracerco’s GammaTrac™ was developed as a reliable method of tracking pigs through pipeline systems. Adding GammaTrac™ to your inspection campaign is a reliable and simple operation that has a proven track record in the industry. The unit can operate on any diameter pipeline, including pipe-in-pipe, topside or subsea, with the ability to be used for gas, liquid or multi-walled pipelines. 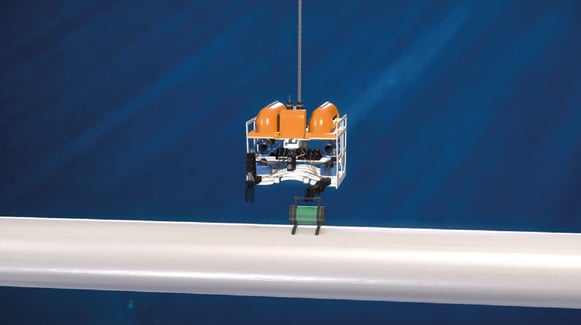 Figure 1 - GammaTrac™ units are attached to the pipeline with the use of an ROV, to track the progression of isotope tagged pigs through subsea pipelines.

GammaTracs™ are deployed by divers or ROVs (Figure 1) to the designated monitoring locations. They have four unique functions built into the firmware. These operating functions include Flagger, Ranger, Totaliser and Interrogator:
• Flagger – a single pigging operation that exhibits one-trip visualisation on the LED screen.
• Ranger – works as a radiation intensity meter, to pinpoint the location of a pig, based on the strength of
the isotope installed.
• Totaliser – counts the total number of tagged pigs that have passed the monitoring location.
• Interrogator – combines all modes, and counts the total number of pigs and time of passage.

When an isotope-tagged pig passes a specific location, the GammaTrac™ unit records the date and time of the event. The event is stored internally, and displays the time and number of pigs that have passed externally on an LED screen. This feature of the unit, known as ‘Interrogator’ (Figure 2), is the most widely used feature due to its versatility, and the ability to download the stored data from the internal memory. The battery life is rated at 3000 hours, eliminating the need for constant battery changes and prolonging the subsea deployment time.

The Case Study
Tracerco was requested by a GOM operator to supply pig tracking isotopes and equipment for use on the dewatering, conditioning and commissioning phases of a newly installed 200+ mile pipeline. Tracerco GammaTrac™ and ROV alarm equipment was allocated for the project, to track the pig launch/receipt times. The Tracerco ROV Alarm equipment consists of a subsea radiation detector that is integrated through the ROV, to provide results in real-time to a topside laptop computer. Two Tracerco technicians and the full equipment spread were mobilised and deployed to three marine support vessels (MSVs). Isotopes were loaded into the initial three pigs for the dewatering phase and introduced into the pipeline.

Figure 2 - Deployed by divers or ROV, the GammaTrac™ unit monitors specific locations, and the unit LED screen displays the time and total number of tagged pigs detected in the pipeline.

If the original plan to strategically place the seven GammaTrac™ units was put in place, the operator could have eliminated 7-10 days of vessel and man time by monitoring a larger area of the pipeline, saving a substantial amount of money on the overall project. When placed at dedicated intervals along the pipeline, the GammaTrac™ units work as visual markers to show the pigs’ progression to the platform destination. The GammaTrac™ LED display is easily visible subsea via the cameras on the ROV. The stuck pig finally stopped bypassing after a regimen of pressure pulsing and pipeline bleed-off operations. The pigs were then tracked through the final 75 miles of pipeline using the ROV Alarm detector equipment to the parking location specified by the operator, completing the first phase of the dewatering operations.

Phase Two: Conditioning Project
Phase Two of the pigging operations began approximately a month later, after the process piping was aligned and tested for the jumper tie-in to the platform. Another series of tagged pigs were introduced into the pipeline for tracking purposes.

For this phase, twelve additional GammaTrac™ units were deployed for the pig tracking operations. The monitoring positions for the units were placed at each of the six in-line skids (ILS) and in-line valves (ILV). With this amount of equipment deployed subsea, the pipeline monitoring coverage was divided into 20 segments, enabling the ROV equipped vessels to track the progression of the pigs through the pipeline during the conditioning phase.

A total of seven pigs were tagged and introduced into the pipeline. The MSVs utilised the Tracerco ROV Alarm equipment to track the pigs down the length of the pipeline. Using the Interrogator function, the total number of pigs were counted, and their time of passage logged for each of the seven pigs passing through all of the monitoring locations. The calculated pigging time for this phase was soon adjusted, after the pig velocities were shown to be travelling slower than expected, due to the change in bathymetry of the sea floor, displacement of sea water, the pipeline conditioning chemicals and nitrogen.

The positioning of the GammaTrac™ units allowed operations to stay immediately up to date with accurate timestamps for each pig at each location. The pig passage times were relayed throughout the customer operations team, in order to modify pumping rates and the chemical injection process. The primary tracking vessel continued to follow the pig train down the length of the pipeline to the termination platform, where Tracerco technicians removed the radioisotopes during the pig recovery operations. A secondary vessel was utilised to recover the GammaTrac™ array and perform the necessary valve alignments for the pipeline shut-in procedure.

The Conclusion
With the implementation of Tracerco Diagnostics™ pig tracking services, Tracerco’s customer was able to use the monitoring information to accurately track and time the pig train’s progression down the length of the pipeline. This saved vessel and equipment costs, and enabled the customer to accurately apply the necessary procedures to complete the project. The development of the Tracerco GammaTrac™ is field-proven technology for over 20 years, providing our customers with rapid and reliable results. This technology is used by various operators on a regular basis, to providing accurate tracking of pigs in subsea pipelines.

Our innovative work gives customers the insights they need to help solve their problems. To find how Tracerco’s pig tracking systems can provide fast, effective and complete control of subsea pig tracking, positioning and location watch our latest Q&A video or  download the case study.