Diagnosing the cause of off-spec production in a distillation column: A case study

Tru-Scan™ and Tru-Grid™ scans are powerful tools that give you valuable insights into packed and trayed towers, tanks, pipes and more. Using this field-proven predictive maintenance technique on distillation columns allows plant personnel to monitor tray or packing hydraulics. A sophisticated monitoring programme can track the effects of fouling or other incapacitating conditions to extend run times and identify maintenance requirements in advance of scheduled turnarounds.

In this latest blog, we will discuss how a Tru-Scan™ application can assist in defining and developing a turnaround project scope at an early stage to ensure that a turnaround meets timing goals. Scan results will fully prepare turnaround planners with the knowledge they need for critical path decisions that must be made prior to a shutdown.

Tru-Scan™ technology provided a quick, cost effective means of diagnosing the cause of off specification production. Subsequently, plant staff were able to plan for repair work, order and install replacement trays in advance, which allowed the customer to be back online in 5 days after the Tru-Scan™ identified damaged trays.

The interpretation of a Tru-Scan™ can be used to diagnose many operating malfunctions. This includes mechanical, process, or rate related problems - such as tray damage, foaming, weeping, and flooding.

Plant personnel had concerns over the poor separation efficiency of a high purity column. They wanted to verify the condition of the tower internals before pursuing other troubleshooting options. Tracerco performed a Tru-Scan™ across the active area to determine if all the trays were in place and holding adequate liquid.

Results of the scan (Figure 1) revealed low liquid levels were detected on Trays 1 - 10. The majority of the trays in this column were not holding a detectable froth level at all, suggesting widespread damage. The chimney tray appeared to be in place but holding no more than 5 cm (2 in) of liquid. 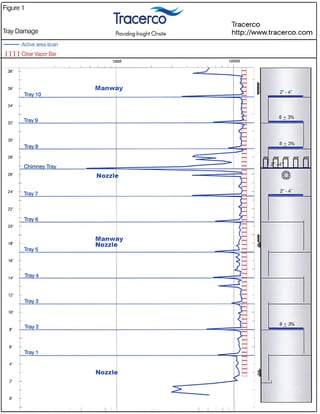 With the results of the column scan, plant personnel scheduled a shutdown of the tower to repair/replace the internal trays. Replacement trays were ordered prior to shutting down the column. This enabled operations and maintenance staff to accurately plan for the repair work needed. Upon entering the column, staff found that all the trays that were indicated as damaged in the scan results were found damaged as shown in Figure 2. 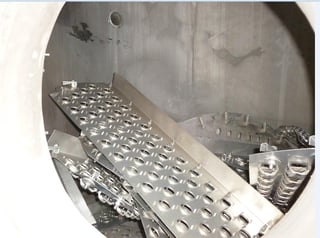 Figure 2: An internal photo confirming the scan results highlighting the trays had fallen down within the tower.

Tru-Scan™ results provided critical information to plant personnel. This enabled them to purchase new trays and schedule contractors to install them prior to shutting down. This in turn allowed the plant to have their outage and be back online in only 5 days.

Additionally, a second column was scanned and some tray damage was also identified. This column was repaired during the same outage, saving the plant extensive downtime and maintenance costs.

The customer was happy to report to Tracerco that both columns were back online and producing on-specification material at full rates once again:

“You guys nailed it! All the trays you identified were down. We were able to buy new trays prior to the shutdown and schedule contractors to install the trays. This allowed us to plan ahead and have the column back up in 5 days. As of yesterday morning the columns are producing on spec material at full rate again.”

Thank you and your team for your expertise!

Tracerco recommends that once a column is brought back online following a turnaround or repair outage, a baseline scan should be performed. Performing a baseline scan with the column clean and operating at full rates will confirm normal operations and allow early detection of degrading conditions such as fouling, damage and other abnormalities.

If you want to learn more about how Tracerco’s technologies enable you to make the right decision, request more information.