How to determine the flowrate in flare lines: A case study

Flowrate and leak testing applications, pipe scanning and meter proving services are fast, accurate and cost-effective methods to determine the flow of vapour, carryover of liquid, build-up of sludge and fouling materials in piping, as well as the calibration of flow meters.

Routinely applied to plant piping systems, they can help with problems such as:

In this latest blog, we will discuss how flow studies provided one of our customers with information on which units were found to have sweep gas flow higher than necessary. This in turn helped plant staff determine the cause of the problem. 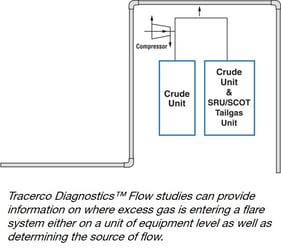 overall flow to the flare and specific unit contributions. The study involved several days of data collection using tracer injections into the flare lines and strategically placing sensitive detection devices externally on the piping to monitor the tracer’s position and movement. The initial overall average flowrate to the flare was observed to be 900,000 SCFD, substantially higher than the refinery expected.

Flowrate data was collected from each unit sub-header to the main flare header. The data revealed substantial portions coming from four specific tie-ins, with the largest contributor being the Crude and SRU/SCOT Tail Gas Units (Figure 1). Further investigation was carried out within these units to identify the sources of the flow.

In this specific refinery, natural gas is added to the flare sub-headers to ensure continuous flow. This is commonly known as sweep gas and can be costly when not regulated properly. Flowrate analysis of the sub-header in the Crude and SRU/SCOT Tail Gas Units found the sweep gas to be 50,000 SCFD higher than necessary, with the cause of the problem found to be a failure to re-install a restriction flow orifice in the sweep gas line following a turnaround. 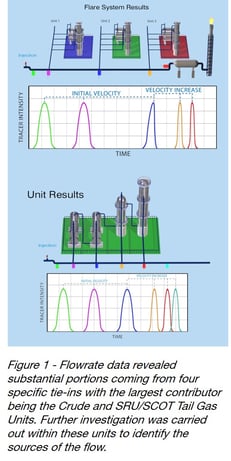 In addition to the high sweep gas, it was determined that the overall flow from the Crude and SRU/SCOT Tail Gas Unit was 219,000 SCFD, which was considered to be abnormally high. After reporting the results to the customer and looking at possible causes for this high flowrate, operators closed the nitrogen purge to an offline compressor to examine its contribution to the flare. Subsequent flowrate measurement showed a dramatic decrease of 162,000 SCFD. It was determined that the process valve for the nitrogen purge was open more than necessary to maintain purging of the compressor.

Isolating the source of flare flow resulted in a substantial saving to the plant. The flare study showed that a large portion of the sweep gas flow was being wasted. Reducing this flow resulted in an estimated annual saving of $73,000. In addition to the sweep gas saving, the plant reduced the nitrogen purge to the compressor. At 162,000 SCFD, it was determined that the cost per year to the plant was approximately $473,000. The refinery reduced the nitrogen flow to the compressor by 50-75%, resulting in estimated savings of $237K to $355K.

The measurement of flow around an oil or chemical process is often required where no metering is present to measure flow distribution between main headers and branch headers, or to verify existing flow measurement devices.

The use of Tracerco Diagnostics™ Flow study offers a rapid, accurate and cost effective method of determining flows of solid, gas and liquids. The results from such measurements can play a key role in predictive maintenance, process optimisation and reduced downtime.