How to gain control of your crude distillation unit (CDU)

With fluctuations in the crude market from over-supply and negative prices to supply shortages and price wars, the diversity of crude is ever changing.  And while it may be attractive to refinery purchasing, crude blending is often an overlooked after thought in relation to how certain process mixes can create unwanted operational challenges.

In this blog, we will discuss how our advanced multi-phase nucleonic instrumentation can analyse desalter performance and improve crude blending capacity providing our customers with the knowledge they need to increase profits, manage risks and reduce costs.

Blending of feedstocks has become an increasingly used option for refiners looking to improve flexibility, maximise operating margins, increase distillate yields or convert high sulphur fuel into diesel and gasoline, but they are not without their difficulties. Whether it be oil sands, shale or condensate, higher total acid number (TAN) or increased levels of elemental impurities and contaminants such as waxes, solids, iron and vanadium all of these characteristics can lead to processing issues. The efficient removal of these impurities along with salts and water (BS&W) from crude feedstock is imperative to maintain reliable operations, prevent unplanned shutdowns and outages, and reduce corrosion and fouling.

Foremost of these challenges is to monitor and manage the position and quality of process fluids, including emulsion, upstream of the distillation tower; namely, the desalter. Whether the process involves inline or intermediate blending, the use of accurate and reliable level or interface control devices (LIC) in the desalter can reduce and in some cases eliminate process problems resulting from unwanted carryover or carry under.

Reliable control
Introducing these crude blends creates some variable processing conditions with respect to instrumentation and control, so it is important by design that devices can reliably manage fluctuations. There are several technologies that can be employed for level and interface control that look at differential pressure, volume percentage of water or electro-magnetic pulses, for example. Changes in operating conditions such as temperature, pressure or even the type of feedstock can also affect the accuracy and reliability of these devices. Being able to monitor and adapt to these variable conditions can optimise separation to improve feedstock flexibility. Mixing can be increased to maximise wash water contact, thus removing more undesirable materials and contaminants from the crude.

Not being able to accurately control the interface is a common occurrence. By providing a high resolution measurement around the oil-water interface layer, the tendency or lack of control leading to incursions of conductive process fluids to the electrostatic grids and overdosing of chemicals such as demulsifiers is reduced. This enables refiners to reduce costs associated with unplanned trips or upsets, ensure the correct amount of chemical dosing, all while enhancing safety. There are also associated environmental benefits from having accurate control over process interfaces with respect to brine or effluent discharge and recirculation as part of wash water recharge. By visualising and monitoring the water level position, it is possible to reduce hydrocarbon carry under or oil in water, which reduces demand on filtration and chemical treatment, improving operational efficiency and environmental compliance of the wastewater treatment plant.

Process review
Tracerco was approached by a refinery to help understand and diagnose the root cause of various process issues on its crude desalting unit. During a recent turnaround, significant damage was found within various distillation towers, mainly involving corrosion and tray positioning or quality. It was believed that the issues could have been caused by poorly performing desalters. Tracerco worked with the refinery to carry out some of their process diagnostic techniques and services on the crude unit, including a neutron backscatter scan (NBS). This technique offers a non-contact solution that can be quickly deployed. It is used while the vessel is online to assess the various liquid levels and interfaces as well as analyse the process condition to ascertain the failure modes of the distillation tower damage.

Neutron backscatter technology
Accurate measurement of levels and interfaces in separators is vital for process control and process investigation. The Tracerco DiagnosticsTM neutron backscatter scan, developed in the 1950s, responds specifically to hydrogenous materials such as hydrocarbons, aqueous liquids and petrochemicals to quickly locate levels and interfaces and facilitate calibration of equipment or optimise process changes (see Figure 1). 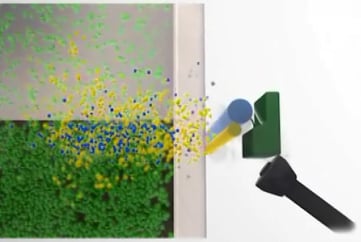 The technology works as the nucleus of the hydrogen atom is more efficient than any other at slowing down high energy neutrons, therefore turning ‘fast’ neutrons into ‘slow’ neutrons. A probe consisting of a source of fast neutrons adjacent to a detector sensitive only to slow neutrons is held against the vessel wall. Fast neutrons penetrate the vessel and interact with the contents (see Figure 1). If the fluids are hydrogenous, slow neutrons diffuse out and are scattered back to the detector. The signal level or intensity at the detector
fluctuates very rapidly when the hydrogen concentration behind the vessel wall changes, which is at the
interfaces: vapour/liquid, liquid/ liquid and liquid/solid.

Process review findings
The NBS scans were carried out on both desalter vessels in the parallel train at previous running conditions. Additionally, as part of the study, Tracerco scanned several operating conditions, which included variations in crude blend and wash water rates to look at the effects on the interface level. Typical NBS results are shown in Figure 2, where the signal change between hydrogenous layers are clearly defined. This is an indication that the vessel is working as per the design conditions; however, the actual results from the study indicated that there was not a clear oil/ water interface.

Figure 3 illustrates the recorded results, which suggested that the unit was not operating as per design due to a large amount of emulsion present, resulting in not having a clear interface. 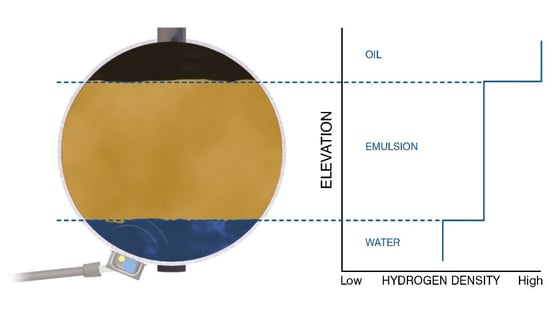 The existing differential pressure level transmitter was showing a steady oil/water interface at the expected set point but, as the results suggested, this was incorrect, meaning the operator had been running for some time effectively without any level control. As a result, the malfunctioning level transmitter led to carryover of emulsion (H2O, NaCl) in the oil stream to the distillation columns, in turn corroding overheads due to increased chlorides. There was also carry under of oil in water, affecting wash water purity and environmental non-conformances.

The Solution
Following the analysis of the results and in consultation with the refiner, The Tracerco ProfilerTM (see Figure 4) was chosen to replace the existing desalter instrumentation as a single, integrated interface, control and monitoring device. Using gamma ray absorption to measure process fluid density and position by the change in radiation intensity, the instrument provides an accurate measurement of the process fluid distribution within the desalter, offering continuous high resolution imaging and control of each phase. 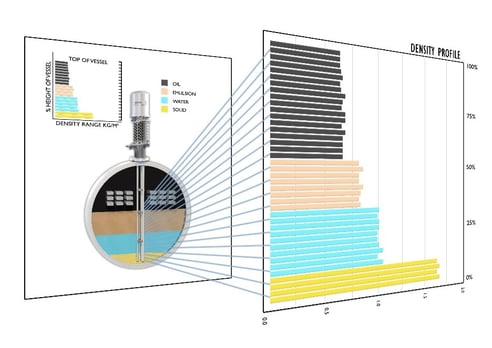 The Tracerco ProfilerTM typically comprises a two or three dip pipe assembly, installed into a vessel through a single nozzle. A narrow dip pipe holds a chain of low energy gamma sources, while the remaining dip pipe(s) hold an array of gamma detectors (Geiger-Müller tubes). Typically, each source is directed using a collimating rod onto two detectors above and below the plane of the source. This collimation reduces the number of low energy gamma sources used, and stops radiation in all directions except that of the detector. This creates a continuous measurement range by directing each radiation beam up or down. Measuring density change in this way allows for the most efficient operating conditions to be maintained, as well as monitoring the effectiveness of chemical additive and mud washing regimes. As part of the analysis of the desalter unit, Tracerco also provided its Hyperion density gauge in conjunction with flow and volume measurements on the crude feed line to monitor the density of blended crude charge as part of its ratio control optimisation. With repeatable, accurate and reliable real-time process measurements, the ProfilerTM provided the client with the confidence to correctly control operating levels, enhancing separation.

Conclusion
In the months subsequent to the installation of the ProfilerTM on the first stage desalter, a number of key and measurable benefits were realised that enhanced the unit’s performance and reliability. Due to the industry leading vertical resolution of 30mm, the client’s confidence in the interface level was increased. This led to optimising the interface for maximum wash water contact, reducing emulsion breaker chemical dosing by 50%. In relation to its crude quality, the refiner noted a 44% reduction in BS&W and an improvement in the salt removal efficiency (SRE) of the unit, with a reduction in chlorides by 50%.

The demand on the atmospheric distillation tower preheat furnace was reduced due to eliminating excess water on the dehydrated crude to provide a more favourable approach temperature. This also had an impact on reducing the corrosion of condensing overheads and towers from hydrochloric acid due to excess chlorides in the heated stream being removed more effectively. Coupled with the enhanced instrument accuracy, the unit did not have any process trips resulting from lack of control or upsets due to interface incursions to the lower grid, which equated to an increase of 2.5 operational days per month.

Tracerco provides proprietary software with its measurement and control solution which is a ready-made graphical user interface providing a clear insight into separation quality whilst enabling efficient operation and control of the instrument. The display options available from the HMI provided the refiner with a window into the vessel, allowing the operators to visualise the process density distribution and utilise the diagnostic data. The HMI offered easy access to the process and instrument status in real-time (see Figure 6), as well as trend data (see Figure 5). This allows adjustments to the process to be monitored and changed on the run, enabling decisions to be made faster, analysis easier to understand, and a greater depth of optimisation. The instrument has now been fully integrated into the refiner’s distributed control system (DCS). 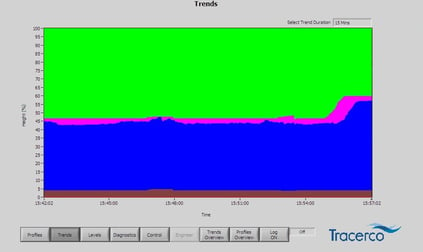 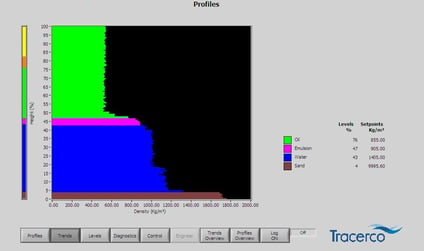 Our innovative work gives customers the insights they need to help solve their problems. The Tracerco ProfilerTM is field-proven in over 600 installations across the globe from subsea to refining and acts as the interface control solution for millions of barrels of oil processed every day. To learn how this low maintenance instrument can be used to prevent unplanned shutdowns, reduce chemical additive costs, optimise processes in real time, increase throughput and improve environmental compliance download our ProfilerTM product datasheet.