In this blog we will discuss using a case study example, how our range of specialist chemical tracers can allow operators to identify the origin of injected water and position of water breakthrough along the wellbore.

A North Sea operator, developing a mature offshore field through in-fill drilling, requested we deploy tracer
technology in a new production well together with several offset injection wells to measure presence, position and source of water production in the new well over time.

The Solution
Due to the complexity of the field and uncertainty in fluid communication it was agreed that solid inflow and
completion integrity tracers would be used in the production well and liquid waterflood tracers in offset
water injection wells. As indicated in Figure 1, the lower completion used six unique oil and water inflow tracers placed in different compartments along the producing lower reservoir plus one unique oil and water packer/completion integrity tracer in a none producing upper reservoir which was isolated by double swell packers. 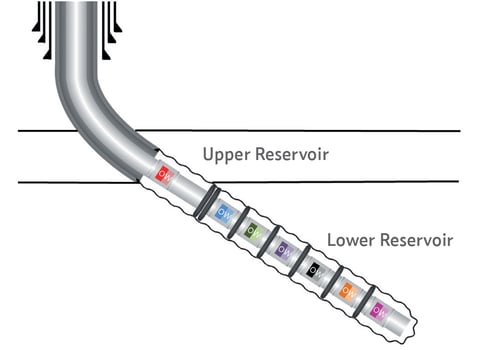 Cleanup Inflow Results
Cleanup of the new well showed an immediate water cut of 88% which increased to 92% and remained at this level whilst oil production rapidly declined. Tracer results from cleanup are shown in Figure 2 where water cut was predominantly from the heel section and some from the toe section of the well. Upper reservoir tracer was detected due to fluid communication through the annulus during deployment before the double swell packers were fully swollen. These were found to be subsequently sealing during later testing. 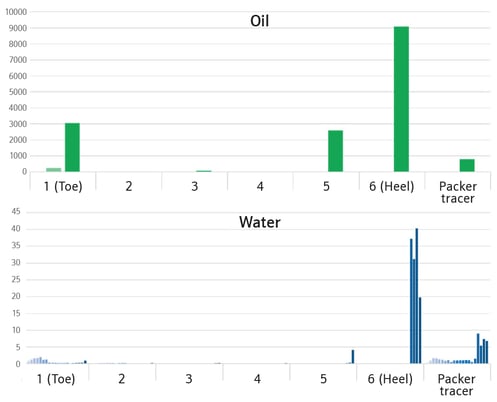 Figure 2 - Oil and water tracer concentration during clean out.

Steady State Inflow Results
Figure 3 shows steady state tracer analysis for both oil and water inflow tracers in the new well. The toe section was seen to be cutting significant water and the double swell packers were now sealing annular communication between the upper and lower reservoirs. 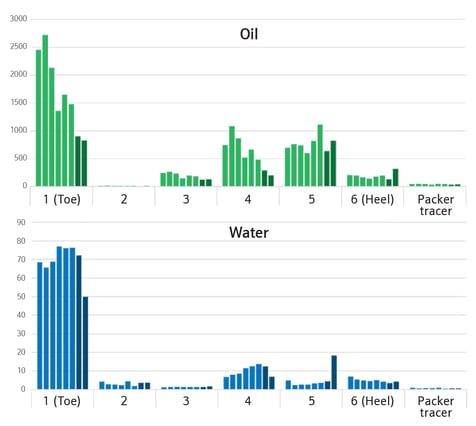 Figure 4 shows restart results of the new well after a brief shut-in. Water influx from the toe and heel sections of the well continued to be detected. The swell packers continued to prevent any water flow from the upper reservoir through the annulus to the lower producing section. 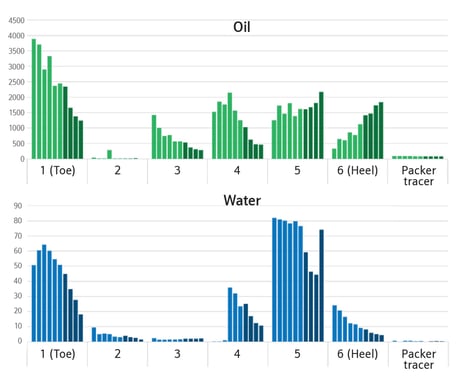 Waterflood Tracer Results
Due to the constant water influx in the new producer, interwell tracers added into the water injectors were
analysed using the same water samples used to analyse for inflow water tracers. Figure 5 shows results of this analysis. 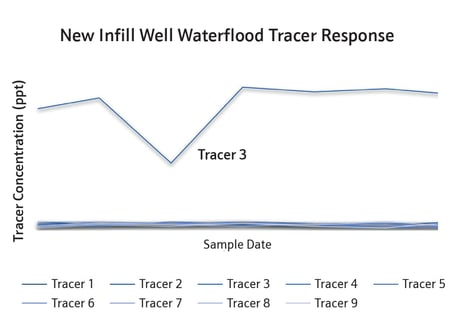 It was determined that tracer 3 added to a specific water injector was strongly communicating with the new
producer. The injector was relatively close to the heel section of the new well. Presence of injected seawater was confirmed through the displacement of low-salinity water in the reservoir by high-salinity waterflooding. However, this detection method was unable to pinpoint which injector was breaking through into the well. Based on tracer results, the bottom hole pressure of the offending injector was assessed and found to be significantly higher than the bottom hole pressure of the new well.

The Conclusion
In a new infill well, inflow, interwell and completion integrity tracers were used to identify the source of
excessive water production from an offset water injection well, locate water influx position along the wellbore and confirm the integrity of the packed upper reservoir section using a two swell packer sealing design.

Salinity measurement of seawater versus formation water was used as a method to identify water breakthrough from an injector. However, it was impossible to identify which injector was causing high water production. The use of tracers within water injectors exactly pinpointed the source of the problem.

Chemical tracers provided a demonstrable value, as a method to rapidly quantify the impact of well spacing, establish acceptable bench-to-bench communication with varying completion designs, and influence of Parent Wells during infill stimulation. To find out more, watch our webinar: Chemical tracer technology or  download the case study.