Pre-turnaround scans are very useful tools for facilities to utilise for planning turnaround projects. They can indicate some damage within a vessel, allowing for parts to be ordered and onsite ahead of time. They can also indicate an operational issue, which can be corrected without an entry into the vessel. If required they can indicate that the vessel is healthy and no work is needed on it at this time.

Usually, pre-turnaround scans are performed on columns anywhere from six to eighteen months in advance of the scheduled turnaround. In this blog, we will discuss with case study examples how our Tru-Scan™ and Tru-Grid™ Scan technologies helped our customers to save time and money by performing pre-turnaround scans.

The Field Test 1
A gulf coast refiner had planned a major turnaround which was scheduled to begin in the near future. Following the original planning phases in preparation for the turnaround, many additional potential projects were being added. They were in jeopardy of having to add additional downtime, or remove other projects originally scheduled in order to get them all completed. One of the original projects was to enter and inspect one of the distillation columns in an amine unit. The column was not presenting any issues, but it had not been entered for quite a while and there had been several upsets to the unit over the years. As such, the
refiner wanted to inspect it to give a clean bill of health, and make any repairs that might be needed.

The Analysis
The refiner had not yet reached the time requirement to enter this tower. If they decided to wait until the next scheduled turnaround, they would still be in compliance with those requirements, so they were contemplating removing this column entry from the turnaround to allow a more critical project to be performed. Therefore, they decided to contact Tracerco to perform a gamma scan of the column to help them to make that decision. This trayed column was scanned and the results are illustrated in Figure 1.

The Conclusion
The Tru-Scan™ results revealed a healthy column, with no signs of gross mechanical damage, and no process
degrading conditions. Combining the refiner’s knowledge of this column’s operation with the data from this
pre-turnaround scan, it was decided to remove this column entry from the turnaround list and utilise the time that would have been needed to complete another project. This contributed to the turnaround finishing within the budgeted amount of time, and they have not experienced any issues with this column since.

The Field Test 2
A petrochemical facility was scheduled for a turnaround in one of their units and decided to perform pre-turnaround scans on some of their distillation columns to determine if they would need to be entered during the outage. One of the columns had been operating poorly following a recent upset, experiencing poor separation.

The Analysis
This column was scanned about six months ahead of the scheduled turnaround, and the results of the Tru-Scan™ can be seen in Figure 2. Tru-Scan™ results revealed that the top twelve trays of the column above the feed to the column, indicated an abnormal profile. The trays exhibited low densities and reduced or no froth height loadings when compared to the trays below the feed. Trays 5, 6, and 9 indicated profiles consistent with not actually holding liquid, but tray debris. The profiles observed for the trays in the top half of the column was indicative of tray damage. 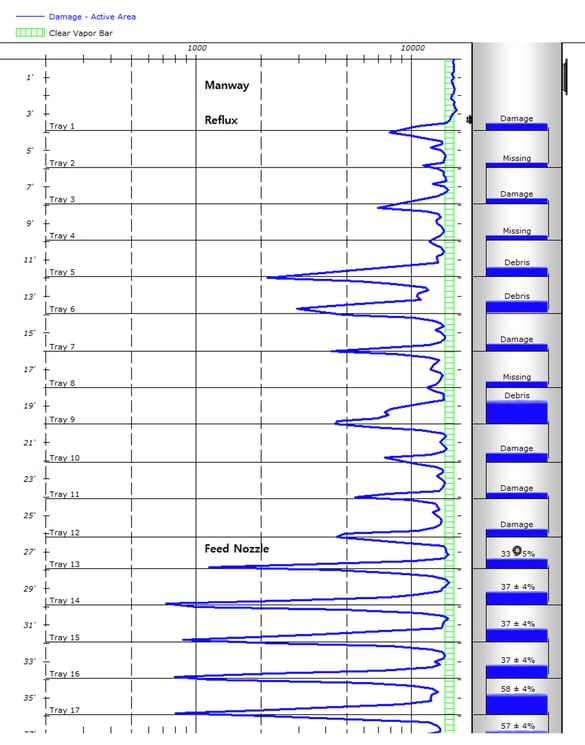 The profile exhibited in the column scan would definitely explain the poor performance and separation issues that it had been experiencing. Following a review of the scan results the customer decided to enter the column during the turnaround. Parts were ordered in advance to replace the trays in the top half of the column, and arrived onsite and ready to install when the turnaround began. This allowed the facility to save both time and money to repair this column. Had they waited until the turnaround to enter and inspect this column, they would have had to order the parts on an emergency basis, increasing the price, as well as extending the amount of time for them to arrive. Also, the other columns that were scanned ahead of the turnaround were given a clean bill of health and did not need to be entered.

The Field Test 3
A petrochemical facility was preparing for a turnaround of a unit that occurs on a regular basis, every other year. As part of their normal planning, they perform pre-turnaround scans on several of their columns ahead of the turnaround, then perform baseline scans following start-up, if any changes are made to the columns during the outage. They use the data obtained from the pre-turnaround scans to help determine whether are not they will enter a particular column during the outage.

The Analysis
Figure 3 is a plot from one of the columns scanned ahead of a recent turnaround. This column had recently been exhibiting a higher than normal differential pressure as well. The scan results contain two scanlines, a red scanline representing the baseline scan that was performed following the previous entry into the column, and a blue scanline representing the current pre-turnaround scan. During the pre-turnaround scan, trays 21-23 indicated evidence of foaming, and inflections were seen in the froth area of those trays. There was also evidence of carry over above tray 24 up to the top tangent of the column. However, there was no evidence of any mechanical damage observed during the scan. The profile seen during the pre-turnaround scan would definitely explain the high differential pressure that the column had been experiencing. 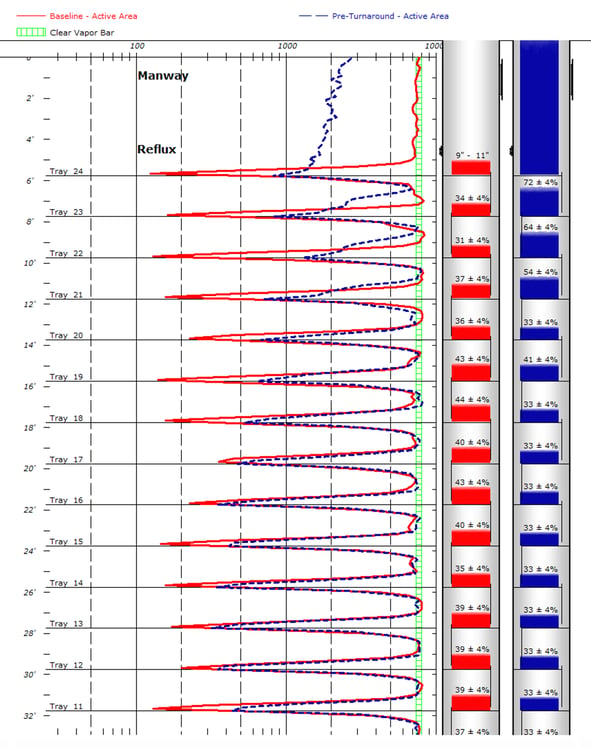 Figure 3 - Tru-Scan™ results detected an operational issue in the column which could be resolved without entry.

The Conclusion
There are certain operational parameters for this column that can cause foaming. After reviewing the data from this scan, changes were made to those parameters and the differential pressure returned to normal. The facility decided that an entry into this column would not be needed during the turnaround and they were able to shorten its duration. This was an example of a situation where there was an operational issue with a column, and had the facility shutdown and entered the column for an inspection, they would not have discovered the true issue.

Tru-Scan™ and Tru-Grid™ Scan results help to determine whether to enter a particular column during the
turnaround outage or remove it from the critical path list.

Our innovative work gives customers the insights they need to help solve their problems. To learn how scanning and tracer diagnostic services can help you quickly identify, resolve and improve operational issues, optimise and run your processes more efficiently and potentially save you millions of dollars every year watch our webinar; optimising processes with data driven diagnostics solutions.